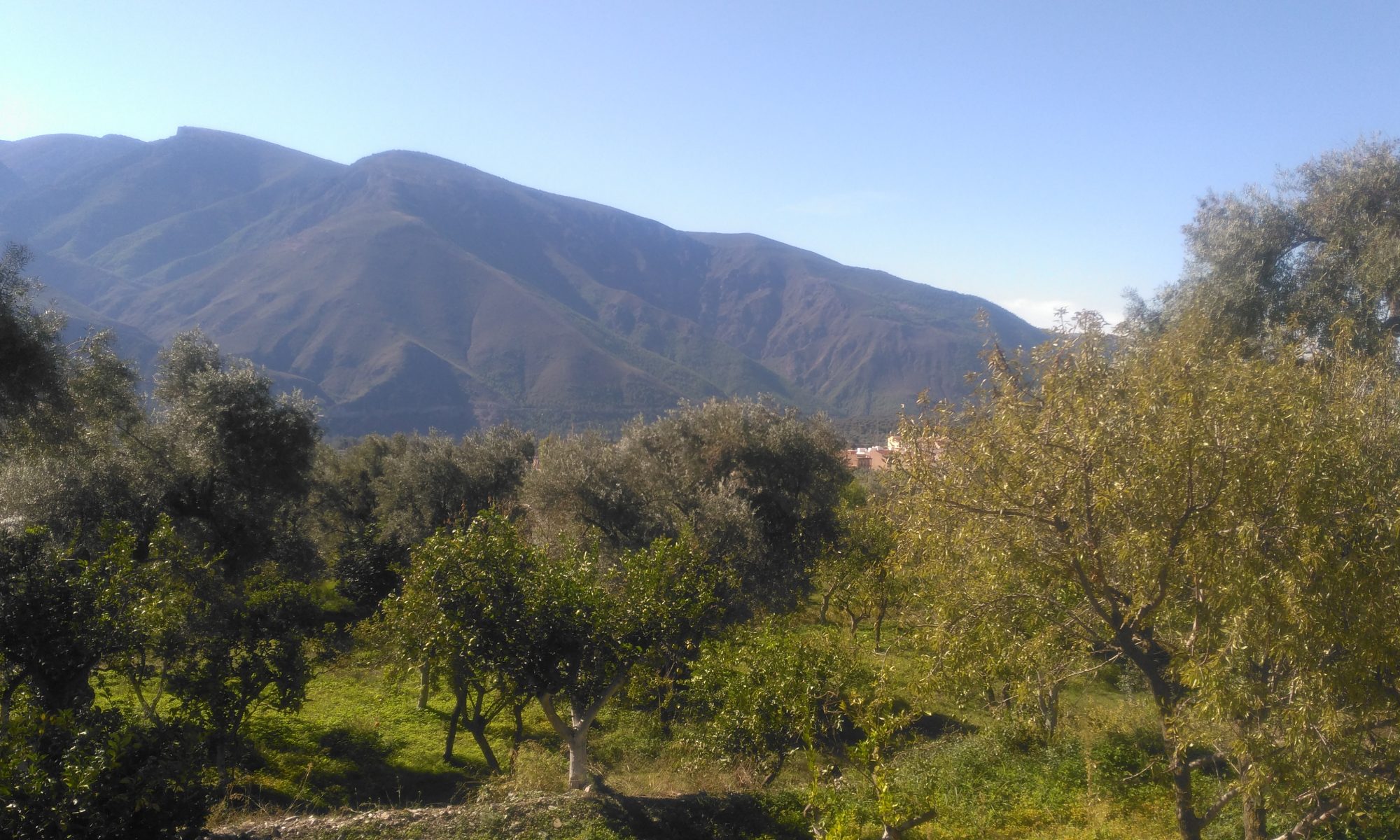 Nobody warned us it would be so stressful to follow our dream.  Turns out it takes balls.  And now that  My Gorgeous Man’s gall bladder has been unceremoniously relieved of its duties… it’s time to for us to pull up our big brave pants and… Just Do It.  Nike would be proud of us.

I’ve been asked a few times how we ended up picking the Orgiva area?

When we were Universally kicked out of Hong Kong, we spent about 6 weeks down in the French Mid-Pyrenees and then the Cote d’Azur with a view to finding our new home and life. We’d had French barn renovations (MGM’s thing) and snow capped mountains (my thing) on our Honkers vision board.  Blessed to stay with friends from my ‘Hot Hostie’ flying days who were now living in France,  we all drank far too much wine and had way too much fun.

But I just hadn’t felt a connection with the land.
For me, that’s the deal breaker.  And that’s why, two years ago we ended up back in our home town of Edinburgh.  It seemed the logical thing to do.  Go home until we find our new home.

Looking back, it was over 4 years ago that I was first introduced to Orgiva.  My co-creatress and wonderfully spooky soul sister and I had been looking for a European venue to host our Illumination Retreat for Women.  And a friend of a friend put me in touch with another friend who had done just that, in Orgiva.

OMG, when I saw the pictures, my heart soared and melted all at once.  It was absolutely stunning.  I didn’t realise it then, but I’d fallen in love with the land.

But life went on… the retreat didn’t happen and The Spanish Alpujarra faded into the back of my mind.

Fast forward to 3 years ago and my wonderfully spooky friend came out with a blinder.

“I don’t know why I’m telling you this… but you need to look at Orgiva.”

Fairynuff.
But we were still in Honkers and I still didn’t pay Orgiva much attention.

It was only this year, when MGM and I were so fed up with life in Scotland, that I actually ‘heard’ her.  She had been persistently patient.

Now, when you’re ready to hear, you hear.  And that’s when the magic of the flow picks up pace.

So there we were, earlier on this year, so frikking miserable that we were seriously on the verge of packing up, buying a camper van, fecking off and figuring it out along the way.  As you remember, this didn’t go down too well with our nearest and dearest and we temporarily got back in our box.  Until June.  When we did the sensible thing and flew down there for a week to check this place called Orgiva out.

The Universal flow even gifted us a rare run of TV programmes on Andaulica and Granada.  And, boy did it looked stunning!

MGM followed the Google flow and had found us a gorgeous Eco Airbnb on the outskirts of Lanjaron (5 miles from Orgiva) that suited us perfectly for our week of Alpujarra explorations.  It was run by an English woman who was a holistic therapist… with space to hold retreats and workshops.  We booked in and the flow REALLY began to flow.

In my heart, I was already running retreats there.

Nothing could prepare us for actually being there… or for the feel of the land… and those stunning mountain views.  OMG. I was in heaven.  I was sold.  My dream of snow capped mountains might not have to stay a dream after all.  The scenery was dramatic, but gentle.  It felt like the land was welcoming me and holding me… there was an underlying strong, high vibration that was powerful and deeply healing… transformational, yet soft… soporific but reviving.  And I literally felt myself relax and come alive all at once.

If you’ve read my previous blogs, you’ll know that we started looking at properties.  We had some absolute nightmares and absolute delights… and it became obvious that looking for a new home while living in a different country really wasn’t going to work.

We needed a starting point… ASAP.

It was while we were having an ‘overloaded sugar boosted, ice-cream latte to die for’  in Orgiva town centre that we spied an agents with some interesting properties that were in our price range.  And they did rentals.

The agent, didn’t speak a word of English.  And neither of us spoke Spanish. I’m still pretty fluent in Brazilian Portuguese from my married years in Rio de Janeiro so there was enough of a tiny slither of common ground to cover the basics. With a lot of made up words, intuitive guessing and blank looks along the way.

We had an interesting afternoon with him. He happily took us totally off road and directed us up a dried out river bed to get to a property, couldn’t unlock the massive heavy duty padlock…couldn’t get a phone signal to get hold of the owner… and we eventually ended up back in his office, scrolling through rentals.

I have absolutely no idea how it happened, but we saw the place that we’re soon going to be calling home and just knew it was for us.  He took us to see it there and then. The owner was an animated and eccentric woman but she had such an open heart… and she had 2 equally crazy, high energy terrier type dogs that adoringly followed her around nipping at each other… and her ankles.  Through all her gesticulations, she agreed that we could move in for the winter… along with our anti social, ‘size of a mini pony,’ rescue greyhound.

MGM and I couldn’t believe our luck.  It had a pool.  A secure garden.  A BBQ.  A view.  Was within walking distance of the town.

And it was ours… if we paid up now.

Were we mad?!  Handing cash over to an agent  who I certainly didn’t fully understand… but he didn’t seem to care two hoots that we didn’t yet have Spanish paperwork… or Spanish bank account… or the essential NIE for all life to function in Spain.  Perhaps I hadn’t understood anything of anything!  Perhaps he was having a laugh and rubbing his hands together with glee.

Or perhaps he was the Universe’s answer to all our newbie, naive expat needs!

My Gorgeous Man and I agonised over the ‘should we or shouldn’t we’… and all the ‘what ifs’ that could possibly be ‘what iffed.’

The thing was… if we didn’t pull up our big, brave pants… then we would head back to Scotland and nothing would have changed.  No home and no starting point in Spain.  And that felt a whole lot worse than taking a risk.

“It’s only money!” we said.  Cue the nervous laughter.

But isn’t it crazy how we can talk ourselves out of something that’s actually great for us… because we’re conditioned to expect the worst… and be terrified of making that ‘wrong choice?’

So first thing that morning, blurry from lack of sleep, we rocked up at the agents and said YES!  A great big grin spread across his face… and he asked for the cash deposit.  MGM went across the road to the cashpoint and sucked our account dry.  We handed our stash over and he handed us back a hand written receipt on yellow paper.   And all was finished off with great big firm handshakes and wide smiles saying “Muy bien!”

And then our minds caught up… and we realised what we’d done.  Handed over cash with no contract or any of the ‘normal’ rental reassurances.

It had all just ‘happened’… the flow had taken over and we’d gone with it.

So we went for another sugar boosted caffeine infused glass of badness to celebrate.  It was too early for cerveza.

It wasn’t long after that, that we found out through the local network that our smiling agent had a reputation as a bit of a shark.

Oops.  Oh well.  Not much we can do about it now!  No point in worrying!  Definitely cerveza time.

And so we flew back to Scotland, with what we hoped was a new home under our belt.  Our life was about to change big time.

And on a surge of inspiration I set dates for my Spanish Channelling Love Retreats at the Eco-Finca we’d stayed at.  And they sold out so quickly that I set up an extra weekend… and that sold out too.

So as you read this, I am now in Orgiva… MGM is still in Scotland fully recovering from his surgery and closing up our home there… and I will be welcoming my first retreat guests on Friday 3rd November 2017.  And while my guests will be enjoying the Eco Finca,  I’ll be setting down roots in that gorgeous little house that we’d bravely put the inspired deposit down on back in June.

Because yes… the ‘shark’ of an agent came through for us.
He is now officially an Angel Agent.

Sometimes things just aren’t too good to be true… they’re the gems that the Universe brings you when you’re brave enough to follow your heart.

Next time… I’ll be sharing my arrival back into Spain accompanied by my legally, super drugged up, sedated friend… and what actually happens when you make those life changing shifts and land on the land.

Coming soon to Namaste This!
My new step by step video leading you through a simple process to help you hear your heart.  Watch this space 🙂