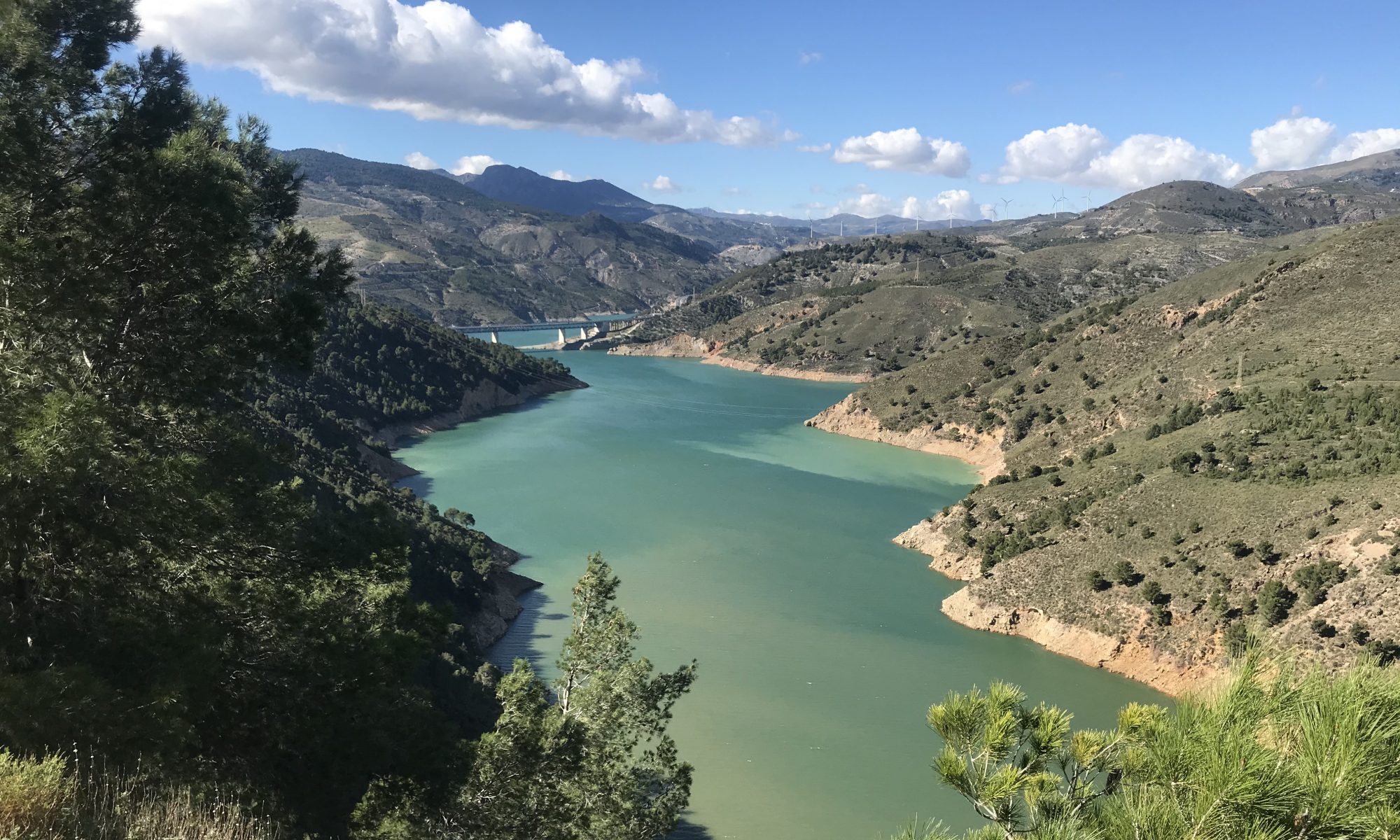 Hola… it’s been a while… again… but somehow this morning’s escapades inspired me to get tapping on my laptop and bring Namaste This back to life.  There’s just too much gold in the ridiculous fuck ups, not to share and hopefully bring a smile to your hearts… so you can say “Thank God, it wasn’t me.”

It was a bleary eyed ‘black’o’clock’ start this Monday morning.  We had to prise Sir Maxelot out of his bed, bribe him with an early breakfast and ensure he did his morning ‘business’ so we could drive up to Granada for 9am without worrying about him being left crossed legged for the remainder of the morning or however long our mission would take us.

Today had been marked at the very last minute on Friday, as the day for that all important appointment at the Government Offices for Foreigners, up in Granada, to get our new TIE cards.

For your entertainment, I have posted a video below, of the reality and power of stubbornness, as beautifully demonstrated by Sir Maxelot… on a rainy, winter night when there was no chance of him going out and getting his princely feet wet. 🤪

So with copies of copies, and documents to support the documents… application forms and passports and residency cards and photos… all neatly organised in plastic envelopes we picked up Emma, our friend, official translator and Spanish bureaucracy ‘smoother-outer’ in Lanjaron, and headed slowly down the windy mountain roads to the motorway to Granada.

Oh boy, rush hour on on the outskirts of Granada… we’d forgotten what it was like to head into civilisation.  So many cars!  Our beloved, noisy campo Kangoo, with it’s permanent layer of stony dust certainly betrayed us a the rural visitors but it fitted nicely into an underground parking space, so we didn’t have to cringe too much as we headed off into the land of modern city bureaucracy. 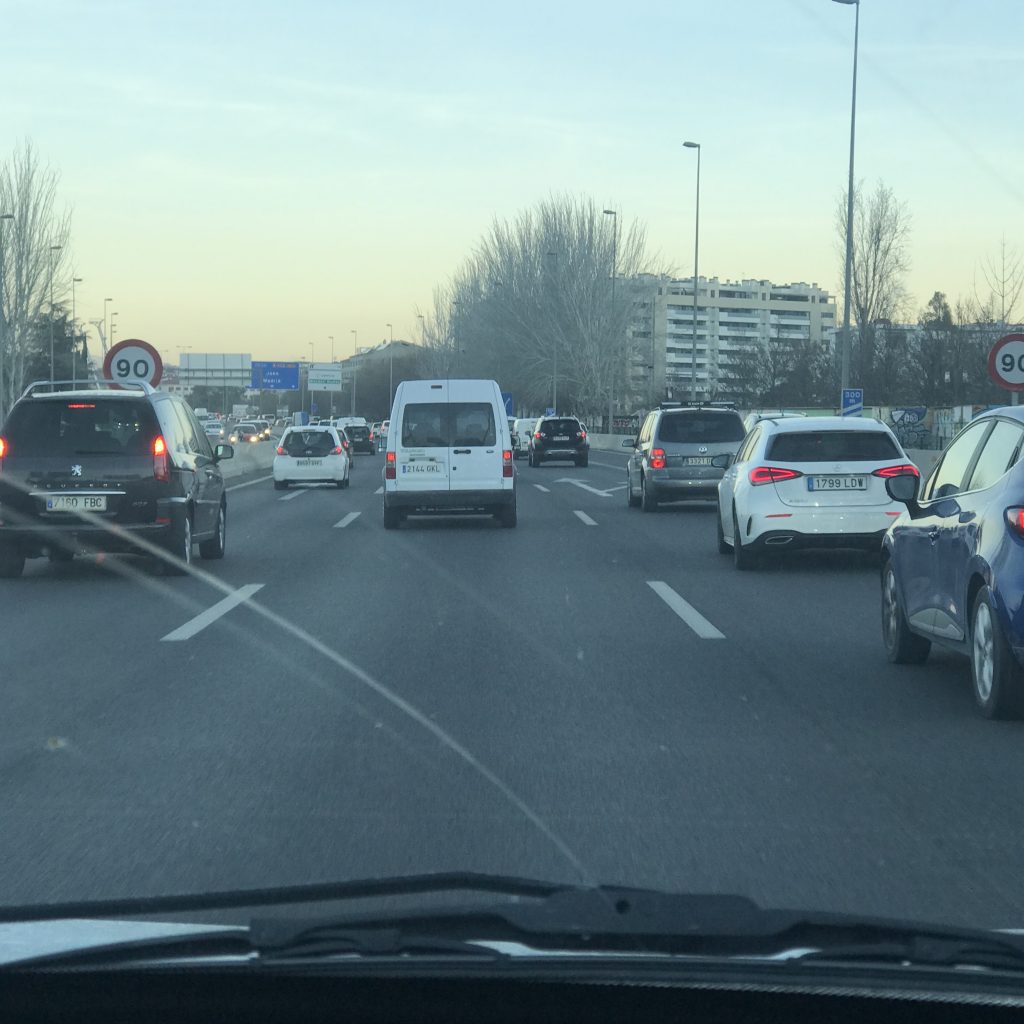 There’s something about a government building with security guards in black body armour and batons at their side, that totally disconnects my brain from calm, common sense…  and turns me into a gibbering wreck.  I find myself unable to think clearly, I get flustered, then stare fixedly at the screen waiting for my number to appear  (just in case I miss it and get into trouble)… fiddle with papers, reorder them, check them and double check them again and yet can’t focus on anything… I fumble with my reading glasses but don’t have enough hands for phone and glasses and papers… and worst of all, I can’t remember a word of Spanish, let alone understand it spoken from behind a frikking mask.  Chilled out, grounded, confident and rebellious Sally, certainly didn’t enter the building with me this morning.

Due to ‘Brexshite,’  UK citizens have to move over to a new residency card, and the insider ‘goss’ on the block is that it’s better to do it sooner rather than later… because nobody knows if the parameters will stay the same or change to be more restrictive and difficult further on down the line.

So my hunky handsome hero of a husband, had the first appointment at 9am.  His little print out (just like you get at the supermarket deli counter) said H-1 and all of a sudden his number appears and is called out over the tannoy…. and off he shoots.  His Spanish is self admittedly, abysmal, but he sailed through his appointment and walked cooly and dare I say it smugly,  back past the security guards to sit back down next to me, to await my turn and scroll aimlessly through Facebook while I continued to stare fixedly at the information screen and it’s changing instructions. 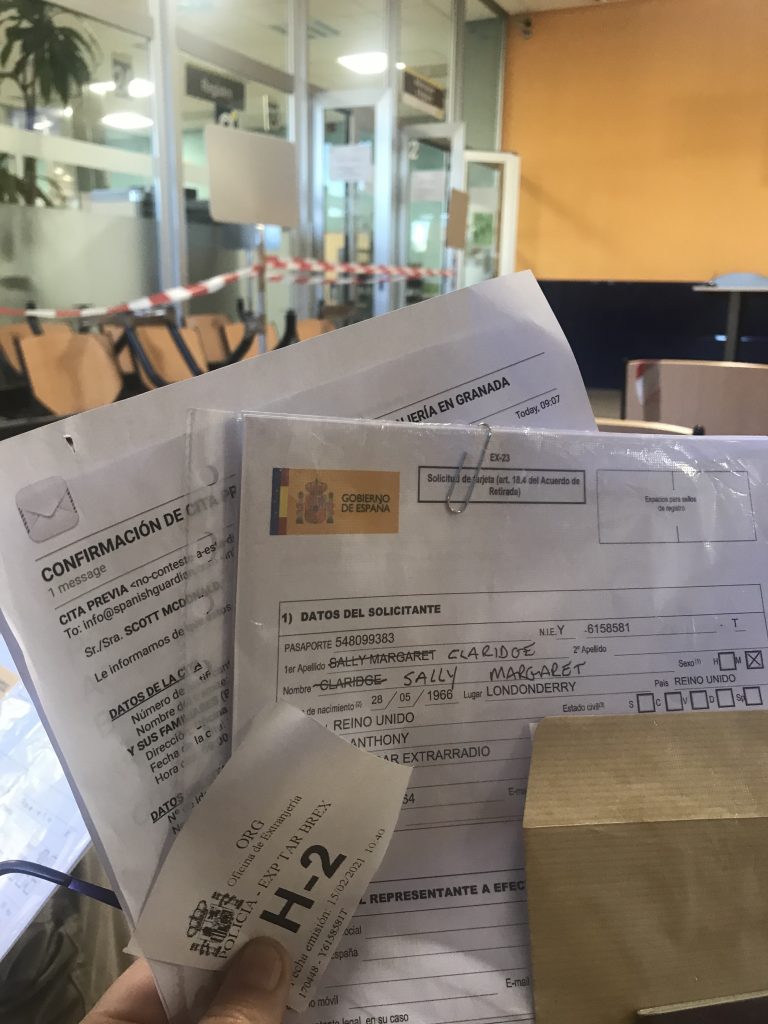 I, on the other hand, didn’t sail through my appointment.

Our friend, ‘translator, organiser, reassurer and nerve calmer downer,’ hadn’t been able to come into the building with us because of…. yup… you guessed it…. the Rona Restrictions.  She was left to shiver alone out on the street in the very cold morning air, hoping for the best, along with other ‘non appointment morale boosters and organisers’  So it was just me in my fluent Portuguese (masquerading as Spanish) with my heart pounding and a now damp, sweaty ticket, numbered H-2, heading across the hallway to whatever awaited me at Desk Number 4.

I smiled through my eyes, offered up a happy ‘Hola, Buenos Dias’ and everything seemed to be going OK till Mr Desk Number 4 started firing rapid Spanish at me and pointing at my actual passport’s photo.  It was the same as the photo that I’d offered up as the one to go on my new TIE.  After several attempts where I heard nothing comprehensible, he eventually got up came round his desk and past the perspex separation screen to rather impatiently tell me that the photo in my passport was over 3 years old and so that same photo wouldn’t be accepted for the TIE.

Didn’t see that one coming.

Then there were gesticulations and rapid fire directions for me to go out of the building and along to the right where apparently there were conveniently placed photo shops (for emergencies like me) where I could have a new photo taken, that would look like me now and not the me of 3 years go… and I could then return back to his desk.

Don’t take an old ‘normal’ photo of yourself,  when you presently have one kilos worth of purple wool dreads on your head… especially when you go into a government building to apply for legal photo ID document.

My waving arms and panicked face wasn’t what Emma was expecting as I emerged through the big entrance and front line of security guards onto the street… but it was reassuring to hear that this had never happened to any of her many clients before… but then again, if there’s a bureaucratic loophole, pothole or frikking pit, my ‘hunky handsome hero of a husband’ and I always seem to find it, and fall into it.

We lead the way in discovering new depths of creative Spanish bureaucracy…
and fuck ups.

So off we trotted to the corner shop for a suitable new photo… with my bag half hanging off my shoulder, reading glasses in one hand and plastic envelope of left over documents half in half out,  in the other hand.

Remember to take your frikking mask off when you’re having a passport photo taken.  Numpty.

Remember to look in the mirror before having your passport photo taken.

Back we all go to the large security entrance with growing queues of all nationalities looking to confirm Spain as their home.  I’m wished good luck… take a deep breath… and the security guards let me straight back into the building.  They were actually super helpful and understanding, albeit initially daunting… and I walked around the metal detector and headed back to Desk Number 4.

New photo accepted. But not with a smile…. his mask couldn’t hide the expression in his eyes.   Which made me try even harder to be nicer and happier and more grateful.

But now it was time for finger prints.

Could I put my frikking index finger down at the correct angle for it to roll across the bright green, laser lit glass to be scanned?

Apparently not.
Because a huge sigh was heard through Mr Desk Number 4’s mask and my finger was pushed numerous times into ‘place’ while he then tried to operate his computer one handed.

I really did feel such a complete and utter numpty.  And that insecurity made me smile even more…. and be even more friendly and  ‘happy go lucky’ while my stomach was tied into a knot as my inner child and people pleaser went into complete over drive…. which I felt just annoyed Mr Desk Number 4, all the more.

We did eventually get there though and I managed to remember how to write my name and scribbled out a couple of signatures and was finally set free to return to the street, jubilant with my mission accomplished.  I felt like I should have skipped out the building with fists high in the air clutching my all important receipt… but I resisted the temptation…. and just came out like a quivering wreck, gagging for a tostada and coffee.

I could see Emma breathe a sigh of relief and my hunky handsome hero of a husband gave me a strong congratulatory shoulder hug and understated “Well done gurl.”

As luck would have it (very shrewd businessman actually)… there was a cafe on the corner next to the emergency photo shop and we grabbed a table, away from the trees and pooping pigeons, to breathe more sighs of relief and top up on  stodgy white bread carbs with melted cheese and wonderfully strong Spanish caffeine.

There was a sense of euphoria as we shared our stories of how we all ended up in this magical part of the world…. and as we calmed down… it was time to head home to the rural bliss and quiet of the surrounding mountains. 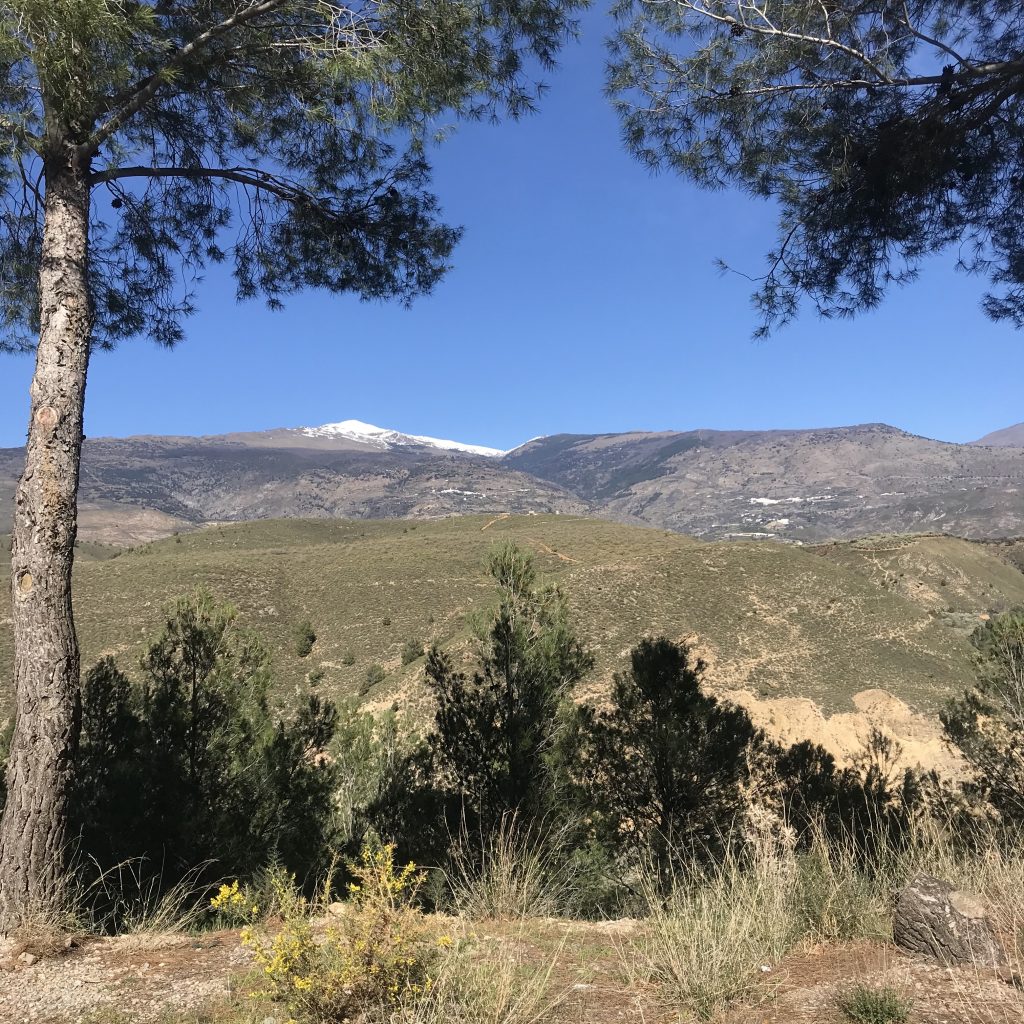 Life in the Spanish Alpujarras could never be described as dull… although there are days when we yearn for a bit of predictable, logical, and understandable normality… but then again… this would become a very boring blog indeed.

Welcome back to Namaste This my lovelies, I know I’ve been absent for many months, but there’s still plenty of real life stories to share.

And in the meantime, just wish us luck in 45 days, when we have to return to Granada to pick up our brand new residency cards.

The joys and challenges of owning a rescue greyhound…