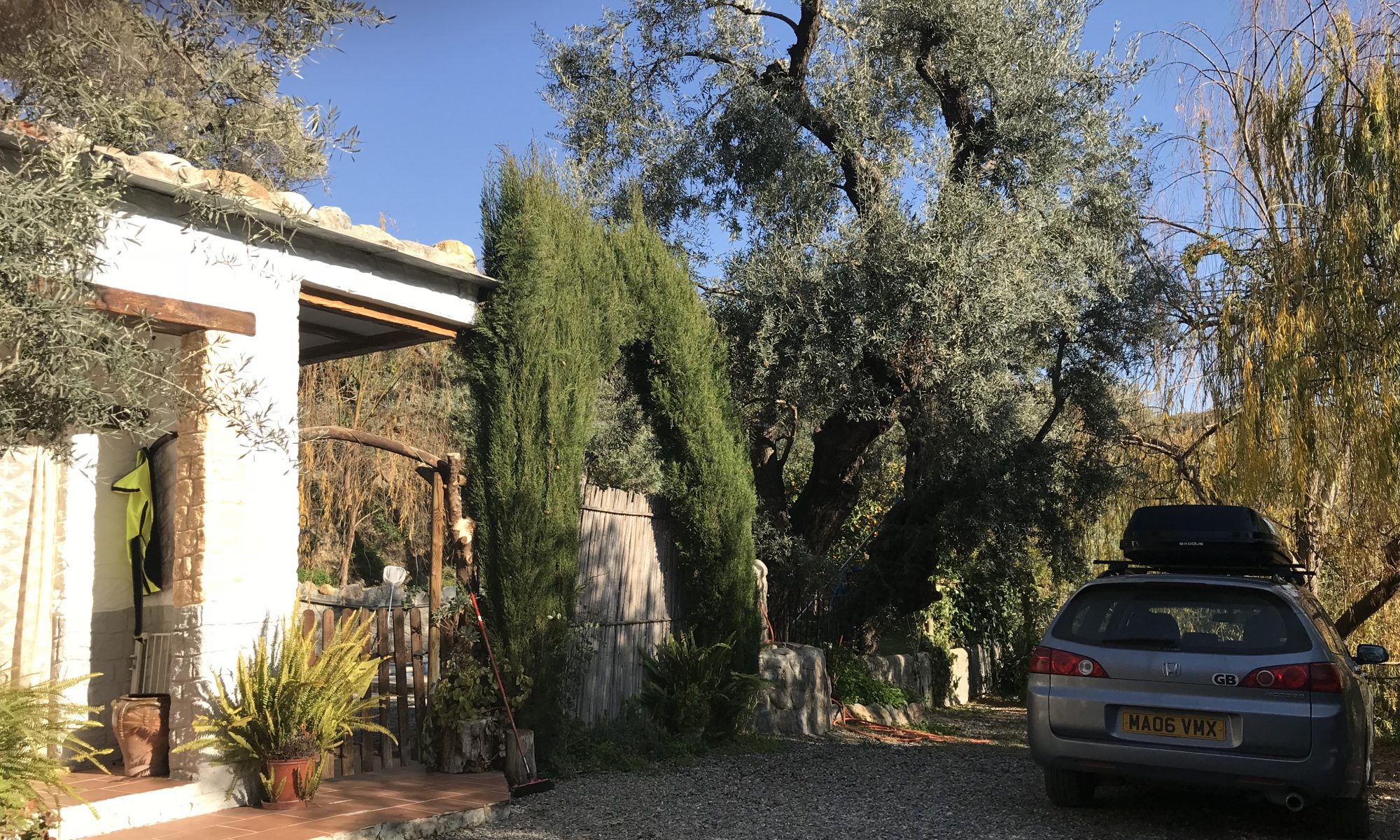 As I write this… I am living proof that we arrived, amazingly in one piece, at our new home in Spain.  My silence here over the past couple of weeks is because we promptly slept and drank and ate and slept some more.  Not even my laptop had the usual pull of a heroin fix… not that I know what a heroin fix feels like… but you get my drift.  We were absolutely frazzled, fried and wiped out emotionally, mentally and physically.

But here’s what happened before we landed.

We’d left the sanctuary of our friends in Mid-Pyrenean France with heavy hearts.  There was a part of me in denial, which believed we’d be arriving in Spain that afternoon… but the reality was, Orgiva was another 2 days drive away.  A time travel, ‘Dr Who tardis type machine thing’ would have been very, very welcome that morning.

But driving was the only option… so drive we did.

I’ve shared enough driving stories over my last few posts and to be honest, there were no real dramas on these last two sectors. Thank God.

So this is what the Spanish border looked like as we drove across the line …. and here’s how shattered and knackered we were by the time we reached our overnight pitstop near Valencia.

We’d been on the road for almost 8 hours and I was crabby beyond crabby… My Gorgeous Man had totally glazed over with motorway tunnel vision… and we had a very fed-up and knackered dog in the boot.

There was only one choice… a great big, motorway service station creative crisp picnic in our budget Ibis bunk beds.

Max took up most of the floor… because the room really was that small.  MGM took the double bed… because Sir Maxelot would no doubt try to get in beside him later in the night… and MGM is his favourite.  And I had the bliss of the top bunk all to myself.  OMG… it was so comfy!

It was most definitely time for a great big, comfort eating pig out and some much needed uplifting, healing, Strictly Come Dancing on i-player.  We could almost have still been in Edinburgh… not.

None of us slept that well… the room was a boiling hot, stuffy sauna and there was an annoying security bolt to prevent the window from properly opening… it drives me mad that we’re not credited with the responsibility of opening a window these days… but we did feel a whole lot better than we had the night before.

Better enough to even pull some Fairy cards before setting off on our last day on the road.

MGM – Laughter
After a dismal couple of years in Scotland where not even funny jokes were funny… a life filled with more fun, joy and laughter was awaiting in Spain!

Me – Positive Expectations Woohoo!!  Keep visions strong, high and clear for the ‘bestest’ most wonderful of outcomes!  I really felt this was for My work and Channelling Love’s Spanish Retreats in 2018!

So with the fairies at our back we all dragged our weary asses back into the car.

But after about 4 hours, as we arrived on the edge of the Sierra Nevada,  my dream of living up in snow capped mountains suddenly became a real, reality.

My heart soared as the views unfolded before us. I got butterflies in my stomach… and… OMG… we really were moving to the Alpujarras!

It was stunning to see the mountains… with their sprinkling of snow and their immense size and ancient earth wisdom, looming ever closer towards us.

We had a quick pee pitstop for Max and I followed the urge to get on Livestream… and found myself going all ‘gushy & gratitudey’ …  I mean… We Were Almost There!

Sir Maxelot had had enough though and he upstaged my gushing with his grumps…. but WE WERE ALMOST THERE!

Then we arrived on the outskirts of Granada…. (we passed a great big shopping centre and made mental notes to explore it in the months to come!)… not too long after that, we drove through the village of Lanjaron where My Gorgeous Man and I had stayed in June and this whole new life had been born… then 9.3km further down the stunning windy mountain road we arrived in Orgiva… over the narrow bridge… stopped at the traffic lights… went up past the church… onto the cobbled road into the town square… past Rogelio’s (the agent who found us our new home)… and past the bakery with the frozen lattes to die for… past Baraka with the hummus and carrot cake to die for…. turning off onto a single concrete track out the other side of town… we crawled past the dead end sign and around the blind corner… past the gated house with 6 dogs peering out at the strange foreign car with a box on the roof and a strange, leggy creature in the boot… past the terraces of olives trees looking out onto the mountain opposite…and finally… we pulled up at our entrance gate.

It was all a bit surreal…. and I felt like everything moved into slow motion.

Our dear friend Jo was waiting for us and she appeared like an angel out of the front door all radiant and smiling… and welcoming us home with open arms and a wonderful hand made, heart shaped sign on the door!

And after lots and lots of hugs all round… it was definitely bubbles o’clock.

After a week’s worth of travelling, miracles, grumps, bumps, trust and everything else we’d been through in the run up to our new life in Spain…  we had finally made it.

In a weird way… I could hardly believe it.

It didn’t seem real… and then in the same moment, massive waves of

WE HAD MOVED TO SPAIN!

OMG… We really HAD done it!!

Another bottle of bubbles was very quickly guzzled… sun drenched photos were taken under the olive and orange trees in our garden… and Sir Maxelot settled right into his new domain as if he’d never lived anywhere else.

Shellshocked and more than a little bit pished because the booze went straight to our frazzled heads, we collapsed onto the sofa and let the reality sink in.

You drove your family all 1800 miles to a whole new life in Southern Spain.  Well done Sir Maxelot for trusting us and coping so well with the journey.  And well done me… for… never giving up on the dream… and making us all move in the first place!

Over my next instalments I will be sharing the realities of our first few weeks in The Alpujarras… which involved MGM having to return to Scotland for family reasons… learning that windy days actually mean donning a smoke hood… learning where the strongest phone signal is in the garden… channelling challenges… a wild boar crossing… an emergency run to a vet in Spanglish… new found soul friends… wood and water runs… adjusting to mountain energies… being told that we’d have to move out of our new home by the end of March (yup)…. and most definitely accepting the fact that I needed more sleeeeeeeeep.

There’s never a dull moment when you follow your heart…

PS.
Did you know that gratitude is one of the quickest ways to turn your life around?  Being consciously grateful for what you already have in your life, shifts your energy out of lack and into abundance… which makes it a whole lot easier for the Universe to bring you the good stuff.

Try this exercise…
When you wake up… immediately write or say 5 things that you’re grateful for.  It can be as simple as the bed you’re in… the job you have… the breakfast that awaits… your friends etc

If you’re finding life a struggle… this may feel this is really difficult to start with… but the more you do it, the easier it becomes… the more you shift your energy… the more you realise you are blessed… and so the better life becomes… and the more the Universe confirms this by bringing more good stuff.

It’s a bit like dominoes… start the flow and it’ll pick up pace!

Don’t give up if you don’t feel like Wonder Woman or Super Man by day 2… keep going… really feel the emotion of what you’re grateful for… and keep going!  You’ll soon have a massive list of gratitude rather than just five forced starting points… and you’ll be feeling a whole lot better about yourself and your life!

And here’s my gushy gratitude as we approached THE ARRIVAL at our new home.