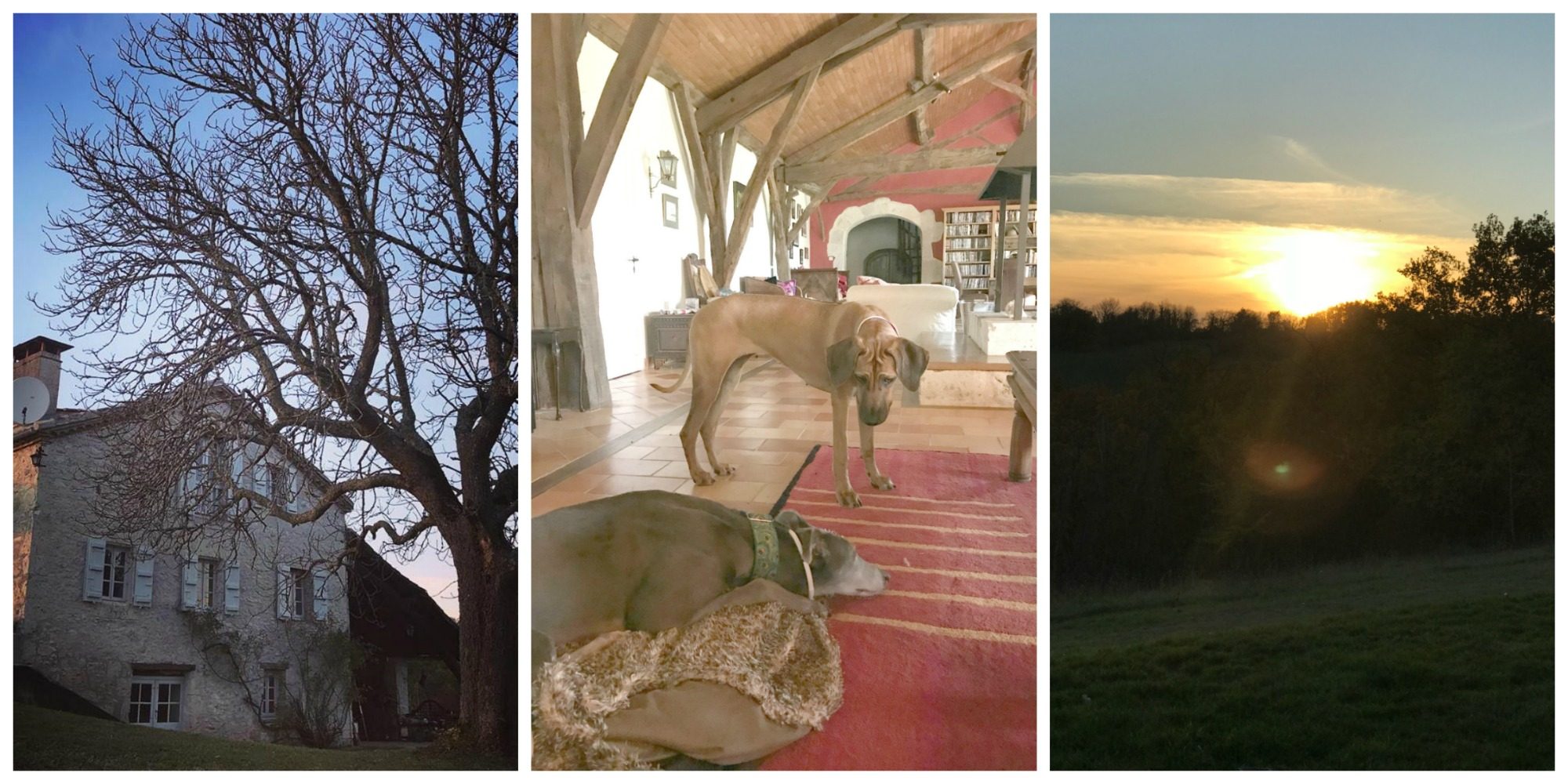 You never know what’s round the corner… literally.  As I signed off on the last post… the sun was setting over the rolling hills of the Mid Pyrenees and we had about an hour of driving left to arrive with our friends near Brassac.

So what could possibly go wrong??

I put my laptop away as My Gorgeous Man turned off the motorway and started out on the country roads.  It was slow going after having been whizzing along at an illegal rate of knots with a couple of speed cameras flashing their disapproval at us.

My inner rebel had secretly loved it.

It soon became very obvious that our headlights were hugely… not very bright at all.  We’d been very good European citizens and applied the very sticky headlamp stickers to our headlights so that our Right Hand drive car, now in a Left Hand drive country, didn’t blind any on-comers… but jeez… something else must have been up because we could hardly see a frikking thing.

Putting the lights on full beam we crawled along the country roads, peering over the dashboard as if those extra centimetres would help… and we became more and more frustrated with the Google Be-atch who kept taking us past signs for Lauzerte… the first one said 10km…. then after 15 minutes… 9km… and then we had a full on WTF moment when the last sign we passed said 11km.

If felt like we were going round in circles and we were rapidly losing our sense of humour.  It was made all the more frustrating because having spent a good few weeks with our friends a couple of years ago after we Left Hong Kong … we would actually have known where we were if we could just have seen where the heck we were going.

Something had slammed into my side of the car… but all I’d seen was a fleeting shadow out the corner of my eye.

I felt sick to my stomach and my heart began to break for whatever poor animal had somehow found the side of our car.  We hadn’t run it over, it had literally run out from the surrounding black and ‘bounced’ off the side.  Thank God we’d been going so slowly.

We’ve no idea whether it was a dog, fox or maybe even a small deer… but the impact was enough to make us stop… take a deep breath… and check out the car.  And try not to cry.  Whatever it was, had already disappeared back into the pitch black of the French countryside.

I didn’t actually care two hoots about the car… as all I’d felt was the full shock and impact through my body.  How on earth  could it survive… and if it had got up and run off, surely it would be severely stunned, have internal bleeding, concussion and who knows what else.  My eyes filled with tears and my stomach churned.  I am a huge animal lover and abhor the pain, cruelty and suffering that comes at the hand of man… and yet, this was exactly what we had caused… albeit inadvertently.

MGM cautiously got out of the car to come round my side and see if there was any evidence of the impact. Thankfully there was no blood.  But there was a big dent in the wing…. and when I tried to open my door… it was jammed.  The dent was stopping the door from opening.

Shit… that was a big impact.
We were both shaky and very upset… but probably nothing compared to what that poor animal was feeling.

All I could do was send Reiki.  I didn’t want to feel into how the poor creature was… but I begged the angels to take care of it and if it was its time to pass, then please make it peaceful, quick and as pain free as possible… and surround it with comfort and LOVE.

My Gorgeous Man and I were so upset….

We started back driving in silence and crawled through the dark, having to fully handover trust to the Google Be-atch, to lead us to our friend’s home.  But the joy and excitement had been somewhat thwarted.

About a half hour later we came to the turn off and crawled even more slowly down the track to their gorgeous barn conversion.   We literally could have walked faster.

And what a lovely welcome we received!
We were instantly uplifted and ….Damn it was great to see them again!  Huge hugs all round and massive glasses of wine were thrust into our hands as we all collapsed onto our respective sofas… with our respective dogs.

Now, admittedly there was a fair bit of tension in the air because of Sir Maxelot’s unpredictable and reactive history around other dogs… and sitting not far away from him was the massive gorgeousness of Tanzi, their 7 month old Ridgeback puppy… who was already almost the same size as Max.  And she was absolutely desperate to meet him.

With Max’s history of lashing out… we had to keep him on his muzzle and lead.  And as Sir Maxelot totally and obviously tried to blank Tanzi… and Tanzi pulled and whined and showed no signs of settling until she got to see her new ‘friend,’ we all tried to carry on our excited catch up conversations.

Dinner was soon ready and we thought it would be better to give Sir Maxelot some space and peace in our room with his own familiar bed and blankets while we all ate… and Tanzi could roam her home again.

About an hour later Scott went down to check on Max.

And it was a sorry sight that greeted him.
Our beloved Sir Maxelot had freaked out and destroyed about a third of his new memory foam bed… and it looked like he’d also peed on his blankets.

Our hearts went out to him.

We realised that he’d probably felt as if he was being abandoned again… and we felt sh*te.  His history as a rescued ex-racer with several unsuccessful attempts at re-homing, remained deep in his psyche and heart.  He’s such a sensitive soul.  So, seeing as we were so knackered and spaced out from the drive and dramas… we called it an early night and went to join Sir Maxelot and reassure him with all our hearts.

Max slept great that night.  On our bed.  He did a doggie starfish and stretched out his long, spindly  legs… while MGM and I clung onto the opposite edges of the bed and tried to sleep.  Having your dog on your bed leaves no room for romance in your relationship… but at that point we didn’t care.  Our little family was together… and we were half way to our new life in Spain.

The next morning we were very tired and achy from our contorted sleeping positions around Sir Maxelot… and we were admittedly anxious over how we were going to manage ‘the dog’ situation.

But… it turned out the Universe had it all figured out.

After an intense, nerve wracking up close meeting of much barking and canine behavioural boundary setting… Sir Maxelot and Tanzi settled into companionship.

We couldn’t believe our eyes.

Tanzi followed Max around besottedly asking him to play… and Sir Maxelot, totally tolerated her.  So much so, off came his muzzle.  We were soooo happy, delighted, relieved.  It’s pretty stressful to have a reactive dog, as you are continually on high alert for potential encounters… even though you know the best way to help them is to drop your own fear and radiate calm, confidence and security.

But it was pure heaven for us to just him let go and witness a happy, muzzle free Sir Maxelot make himself quite at home.   And he scored a huge amount of extra delicious treats… and Tanzi’s leftovers.  Way to go Max!

What a gift.  A lot of the healing shift was down to our dear friends and their wonderful energy, trust and dog savvy experience.

But as the saying goes, all good things come to an end, and after a couple of days of relaxed fun, peace, laughter and far too much wine… it was time to hit the road again.

My Gorgeous Man and My Friend’s Gorgeous Man had managed to un-dent the car wing so that the passenger door opened again… and new headlight lamps had been fitted at the local garage in the neighbouring village.  It had been boy bonding time at its best while us girls guzzled more wine and reminisced over our days flying the skies with BA.  With over 20 years of friendship we’d shared a ‘whole lotta life’s laughter, tears, challenges and crazy happy times.

So, from dog healing miracles and friends reunited… España was still calling… and our new life was waiting on the other side of another 2 days driving.

There are gifts in every moment of this crazy life upon earth… and miracles are very much a part of it.

In my next post… we finally arrive at our new home!

Do you believe in miracles?
If not… then prepare to change your mind!
This is the story of Linda Pollock’s instantaneous healing from just one session of Channelling Love combined with Bio-energy healing.  Linda asked myself and Jo Beth Young for help when she was mysteriously struck down with 17 severe neurological stroke like symptoms, with a very poor prognosis for recovery.

Grab a cuppa and meet  Linda as we chat about her miracle healing and how it has totally transformed her life.

If you’d like to know more about working with myself and Jo Beth Young for one-off healing sessions or personal transformational programmes… click here… or post a reply below… or just email me!

4 Replies to “One Dented Car and Sir Maxelot’s Miracle”

Strawberries and mountains... my life is complete

Aaah... Sundays in the Alpujarras. This morning w

Best breakfast in the Alpujarra! No excuse needed

Thursday night is water night! As the sun sets, w

Just the local goats passing on by... don’t thin

When you get into the Friendly local Post Office a

When you play hookie mid week and head higher up i

Atmospheric ... but ominous. Storms are on their

When you’re making the bed in the morning and fi

And that’s a wrap for today... 😎 #namastethis

Yesterday the skies were dark and it poured with r

When your hero of a husband brings you pizza with

Sir Maxelot.... and his finely tuned art of not lo

When you wake up and there’s a space ship above

Buenos Días and Happy Earth Day from the Alpujarr

Sir Maxelot has a little friend who makes himself