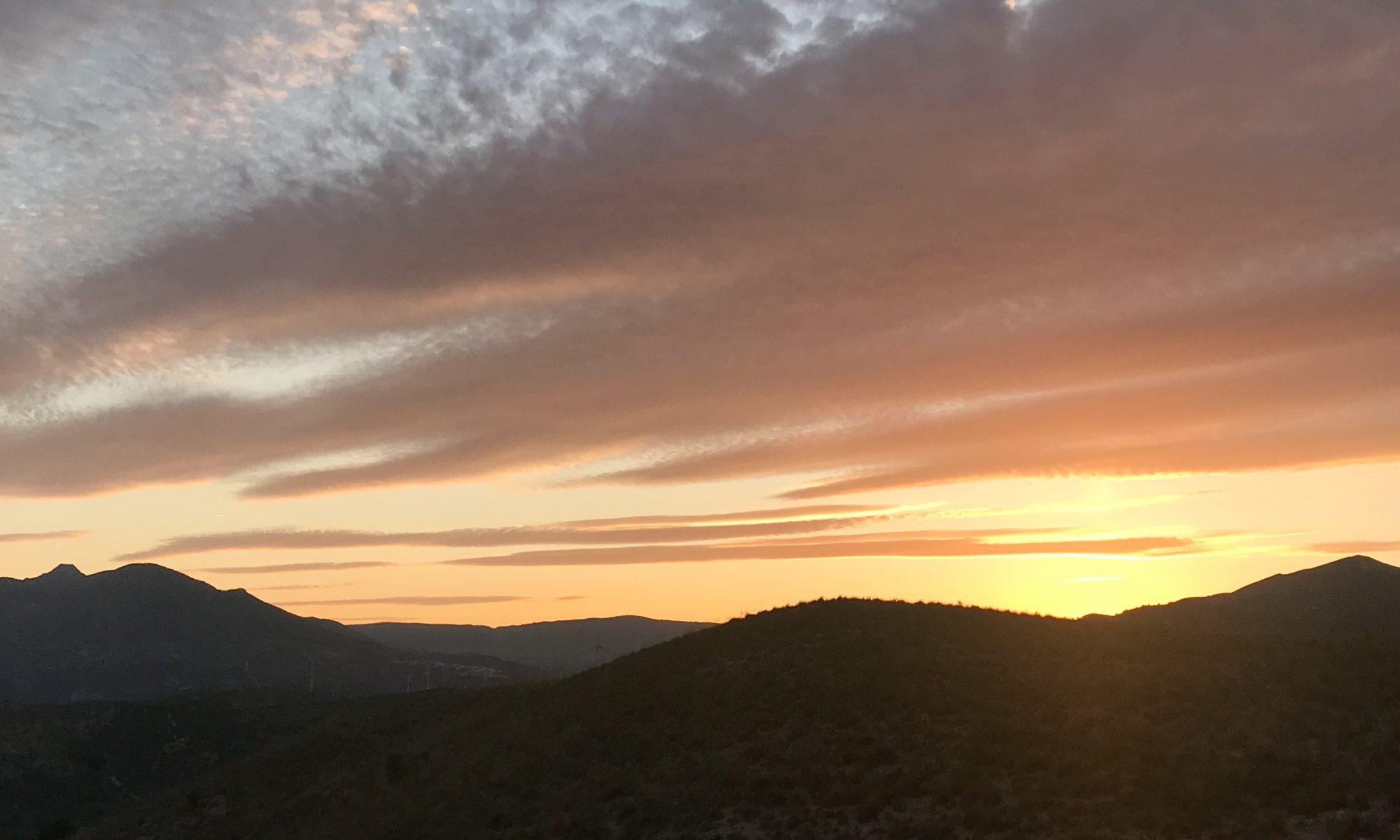 Recently in the Alpujarras…

The sun’s been shining and we’ve been feeling like millionaires… mainly because My Gorgeous Man’s mother gifted us some blessed spondoolies and we’ve treated ourselves to playing house… and as this is our first summer in our magical, miracle wee home… we really wanted to be able to enjoy the gorgeous weather and live the outside life… and really feel like we are actually living in Spain!

Our first gift was a hoover… still to be delivered… followed swiftly by two sails for right outside over our concrete plinth, aka the terrace…. as we desperately needed to create shade to be able to sit out there… and… then….wait for it…. a swimming pool! Yup… we’ve going full expat in Spain and got ourselves a pool.

Now we’re not talking infinity pools or even a dug out pool… it’s more like a put up, adult paddling pool, just big enough for us both to have a quick step into and splash around in and hopefully fit two funky inflatables with drink holders into too…. so we can float in the sun enjoying a sundowner beer. Living the dream, yup… living the dream. Corny, yet so much fun!

But Oh My God.
When we started filling it up from our acequia water that’s stored in our giant 114,000L storage tank…
it was….
EEEEEEUUUUUUUUUWWWWWWCH!!

Green, browny and ‘no way José’ were we getting into it.  So it was time for the chlorine.  Now, we know chlorine’s not healthy.  We know it’s not eco-friendly… but I can’t tell you how excited we are about having a pool… so no lectures please or advice on salt pools, eco pools and the like… because we already know!

What I do know is that My Gorgeous Man almost had a brain explosion trying to put the pool together alone and as I was doing my multidimensional healing work, down in the caravan office and ensconced in a bubble of lurv…

I had no idea that the air was turning super blue up by the hoose.  I just came back to the finished product full of dirty water and a deeply distressed and sweaty remnant of a man… who was now even more my hunky handsome hero.

The water was so dirty that the chlorine tablets didn’t even touch it… even after a couple of days.  So it was decided that we would go down the ‘shock’ route.  As I was going to be in town I took a deep breath and bravely stepped into the local plumbers and had the guessing game of a conversation of  as I couldn’t make out a word the old man was saying… apart from ‘be careful… and burn’.

I nervously laughed as we started shocking the pool… MGM had done the calculations of cubic water and grams and all that… but it still took over 24 hours to clear… and that included added random ‘shock pouring’ into the pool… and crossed fingers.

The thing is, that when we tested to see the PH of the water, the chlorine was so strong that we couldn’t get in it, for fear that all our flesh would be burnt off our bones… but Oh, how we admired it and loved it and enjoyed watching the sun glint and sparkle off the clean, clear water!

We are soooo going to appreciate it over the summer… when we can eventually get in it.

We also had ‘fun’ putting up the sails… grappling with the flapping corners and rope… and My Gorgeous Man climbing into the olive trees to secure our shade… getting scratched, stuck and miraculously somehow doing a ‘Fanstastic Four, rubber arm stretch’ reach to get to the stronger branches that had been ear marked as the securing points.  There was copious amounts of swearing again…. and then beads of satisfied sweat as the last knot was tied and a safe landing back down onto terra firma was secured.

We then quickly  realised that our initial reservations of putting up a sail shade were very valid indeed.  Living in the wind tunnel would probably rip these sails quite quickly… but again…  if we didn’t try it, we’d never know… and it was just such a blessing to be able to sit outside in the shade!  It’s frikking amazing!

Now, if you saw my cryptic Facebook post a few days ago, you may well be curious as to what My Gorgeous Man and I are up to?!

Well… an opportunity arose for us to take on some online work as ‘life insurance sales calls checkers’.  Thanks to the humungous number of rules and regulations, there’s a need for people to check the sales calls for compliance.  It’s part time, in our own time and… paid!

So we said yes!

The reality of what that actually meant, hit home on day one of training, when I realised I was totally out of my depth and dimension.  MGM says I live on a different planet anyway and the day was confirmation of how I really don’t fit into modern day life, with rules, acronyms, tests and office speak.  My brain was fried within an hour… but my MGM hero was reconnecting very well with his old corporate self… and every so often he leant over and said “Are you OK?” with a knowing twinkle in his eye… and the offer of a “You don’t have to do it” get out clause.

By the end of our first day of training,  I was seriously doubting my ability to do the work… my heart was shouting “focus on your wuwu magic ya numpty… it’s going so well now!!!” and my head was saying “but this should be so easy!”… and yet it soooo wasn’t, for me.

But what I did love,  was that our training was further up in the mountains in the white village of Soportújar… which is famous for its witchy history… and the views were absolutely stunning!  We’re definitely going to explore that area more… under less pressured circumstances!

And what I loved even more, was that on the drive back home we had to go via our mechanic to pick up the Landy which had been having the bushes replaced to try and stop the vibration that shakes the car and our nerves when we pick up a bit of speed.  Lee and Joel are the local Landrover experts, enthusiasts and great mechanics… and there’s no language barrier!

Because there were reported roadworks back to the main road, we took the direct route down the mountain. Down the rugged track, that doesn’t look too bad until you actually drive it… but it takes you straight down to the small BP garage on the edge of Órgiva.  It was rough drive that rattled nerves and cars… but it was also sheer magic… the views, the sun, the mountains, the clouds of dust bellowing out from behind MGM as he drove our Landy down that crazy track… and I had such a rush of gratitude and LOVE of living here and of the life we’ve manifested and are creating together.

And to cherry on the icing on the cake… was getting stuck in a goat traffic jam.

And what else have we been up to?

Well… Angel Aaron has been round to help My Gorgeous Man reconstruct the old pergola outside my caravan office so I can sit outside in the shade and write more blogs, rather than be steamed alive inside the caravan in the summer heat…  the broccoli and tomatoes are growing but nothing edible has appeared yet… we’ve had some gorgeous purple/blue irises (or perhaps they’re orchids, we don’t really know… she says shamefully) appear from nowhere… we’ve had more strangers walking through our land and along our acequia as the increasing tension over the water stopping for the summer escalates as every last drop counts… I’ve been letting loose and dancing on the roof… noticing hilarious sweary car number plates… MGM has wiped down the solar panels and realised how layered in dust they were…. we’ve eaten our own spring onions… enjoyed friends arriving in town at the cafe on horse back… the wild winds torn down our washing line along with the washing and the first sail we put up…. sigh… I’ve had my birthday taking me closer to mid-50’s which just doesn’t seem possible… I’ve had my first day of Sunday Sunbathing on the roof and burnt my butt… there’s an increased number of the seriously large shaky spiders… and there’s been the most incredible sunset… and the magic that is Sir Maxelot, has mostly slept through it all.  Mostly.

So in a nutshell… life is pretty damn good right now… and it finally feels like everything is coming into alignment and we’re finding our off-grid feet here in Spain. And the same can be said for my healing work too… watch my ‘rooftop’ revelation video sharing how having the courage to fly in the face of conformity and follow your heart… is the only way to go!

Life is for living!

Life is for Loving!

Until the next time my lovelies… hasta luego! 😎